The Tillamook Area Chamber of Commerce of a decade ago may well be unrecognizable to its modern-day self.

With a more accessible headquarters, more members and a stronger reputation within the community, the organization has changed significantly since 2011. Past and present Chamber board members say that Executive Director Justin Aufdermauer is the mastermind behind those changes. 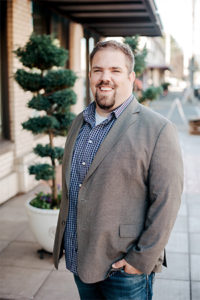 “When he started, the Chamber wasn’t doing very well,” said Whitey Forsman, a former Chamber board member who worked with Aufdermauer for 8 years. “Justin put a strategic plan together and followed it. And it proved successful.”

Last month marked Aufdermauer’s 10th year in the Chamber’s top leadership position. In that time, he has moved the Chamber headquarters, built stronger relationships with business and community partners, and provided a face for Tillamook County on regional and state boards.

“I think people now see the Chamber as informed and educational. They appreciate what the Chamber does for our businesses and for our community. Justin has been the one that’s driving all of that. He has elevated the Chamber in that way,” said Lisa Greiner, president of the Chamber board of directors.

When Aufdermauer started at the Chamber, the organization’s headquarters was based in the Tillamook County Creamery Association parking lot as a visitor center. The Chamber had significantly fewer members, and it focused more on tourism and visitor relations than the community, he said.

A car salesman with Tillamook Ford who was serving in a number of community leadership roles at the time, Aufdermauer applied for the job because he saw it as an opportunity “spend my career” doing something he loved: positively influencing his hometown by being involved in the community.

Forsman said the new director added “credibility” to the Chamber. He was a life-long local resident who knew the community well and truly cared about it.

“Justin walks the walk and talks the talk,” Forsman said.

Aufdermauer brought his community connections from groups like Kiwanis and the Tillamook Revitalization Association to the Chamber with him. He built upon those relationships to grow partnerships with the Creamery, the City of Tillamook and others, Forsman said.

Those partnerships eventually led the Chamber to grow its membership to more than 300 businesses and individuals, and to move Chamber headquarters to a more prominent spot in Downtown Tillamook.

“The Creamery approached us as they were expanding and worked closely with us to relocate. It was really a great opportunity for us to find a downtown location that afforded us an opportunity to still accommodate visitors while becoming more engaged with a broader part of the community,” Aufdermauer said.

In his early years at the Chamber, Aufdermauer caught some flak for being a “free spirit” who was direct about what he wanted, Forsman said. But as he grew into the role – and was mentored by Forsman and other board members – Aufdermauer learned to use that quality to his benefit.

“What really makes the difference with Justin is that he doesn’t mind confronting issues, but he doesn’t carry any ill feeling around,” Forsman said.

Greiner added that Aufdermauer is “direct, but not mean about it.”

“Sometimes when you’re too soft with people, the message gets lost. So I appreciate Justin’s bluntness,” she said. “He also has an energy that is infectious and gets people excited for things that are happening. His passion and excitement rub off on other people.”

Greiner said she see the Chamber as the “rising tide that floats all of the community.” Aufdermauer’s talents and competitive nature fuel daily improvements that benefit Chamber members and the community at large, she said.

“Justin wants the Chamber to be the best it can be for the community, to always be better than it was yesterday,” she said. “He thinks about problems from 360 degrees. He has an organizational thought process, and he understands that there is a need for the people to be involved and informed. He just gets what the Chamber is here to do: build community.”

Since starting at the Chamber, Aufdermauer has shifted his board service from local organizations to state and regional groups. He serves on boards for the Oregon State Chamber of Commerce, Oregon Destination Association and Oregon Coast Visitors Association, among other boards. Those positions allow Aufdermauer to represent Tillamook at the regional and state levels, which have not historically featured a local voice for the community.

“He’s well-respected in the state and on state boards,” Forsman said. “He really is the go-to guy for politicians to get a pulse of what’s going on in our community.”

Aufdermauer joked that his greatest accomplishment over the last decade has been adding to the membership roster businesses that had long avoided joining the Chamber.

“One of my favorite accomplishments was getting Tom (Connaughton) at Diamond Art and Cindy (Gardner) at Sunflower Flats to join the Chamber,” Aufdermauer said. “Those were two anchor stores I grew up with as a local, but they were not members of the Chamber. When they finally joined, I felt like I could cross that off my bucket list.”

On a more serious note, Aufdermauer noted that adding longstanding Tillamook businesses as Chamber members indicated that the organization was operating in the way it was originally intended. Many businesses that had not seen the value of a membership before changed their minds as they saw the Chamber grow.

As businesses started to see the value of a membership, Aufdermauer took it as a sign that the Chamber was making an impact in the community and meeting its mission to build a strong community where businesses can thrive. For him, that is the true pinnacle of his work so far.

“Ten years ago, the Chamber had reached a point where it wasn’t supporting businesses and building community like it should. Me, the board and my staff have been able to fill that void successfully,” he said. “That is my greatest accomplishment: knowing that in the past 10 years, we’ve had a positive impact on building a stronger community.”