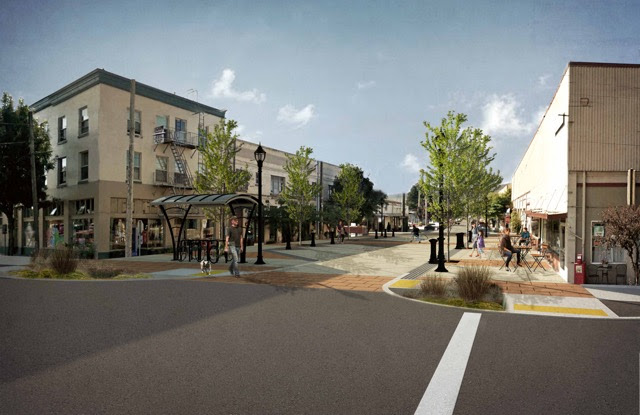 With all of the big crane work underway, and the focus of activity being trained on the Hoquarton Bridge and its surrounds, watching the big bridge puzzle pieces, along with the lesser, more functional components such as the waterlines, get assembled in slow motion, an observer can easily fail to notice that there are flashes of other construction hotspots popping up around the community as well.

Everything is gearing up for the multi-textured and colored concrete pours on Second Street between Main and Pacific.  The treewells are being laid out with electrical junction boxes included so that the community can host events in the new festival plaza that is being created with power available for sound, lighting, and possibly even food carts or other specialties.  An informational kiosk is targeted to land in front of the electrical meterbank on the northeast corner of 2nd and Main and there is a jut-out being formed on the southeast corner of 2nd and Main that will be plumbed for a future fountain.  A covered bikerack will be located on the southwest corner of 2nd and Pacific.

Currently, this future plaza does not have a formal name, but the City’s Beautification Committee is meeting on Monday, March 13 at 4:45 PM to discuss ideas on what to name this plaza, so if you have ideas, please submit them to City Hall in writing before the time of that meeting.  The name, whatever it turns out to be, is going to help set the tone for the future of the downtown and have a legacy that carries forward for decades and so your ideas are encouraged.

Over east, the Oregon Coast Scenic Railroad has completed their review of the plans for the upcoming Port railroad bridge reconfiguration and has signed off on a bicycle/pedestrian bridge that parallels the track that they lease.  The City is excited about this potential future partnership that will eventually tie together at a rail platform in Goodspeed Park next to the Skatepark.  The hope is that someday visitors can get on and off a train there, grab a bus or launch off down the path to the waterfront area for some nature exploring or stopping in at our local downtown attractions.  Or if they are truly adventurous, throw down a skateboard and go sailing.

As to the slow sidewalk improvements along Pacific, ODOT and the contractor are currently investigating options to expedite their construction to ensure completion by Memorial Day.  This will require some alteration of the original projection of one month per blockface.  Both the Chamber and City are pressing for a more aggressive schedule that will meet that original target.

Our Highway Project E-news bulletin is created by Jeannell Wyntergreen, Highway 101/6 Project Liaison for the Tillamook Area Chamber of Commerce.   If you have any questions or would like to share a comment with the Chamber, contact her at hwyproject@tillamookchamber.org