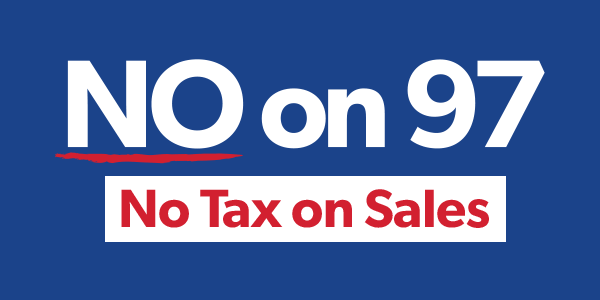 Last week your voter’s pamphlet was delivered to your home. Hopefully you had a chance to flop through it and educate yourself on some of the important issues facing both our country and our state.

One that is getting a lot of attention lately is Measure 97 – the corporate sales tax. Chambers all across the state are urging voters to vote No on this measure, and I’d like to share with you a few of the reasons why.

First of all, advertisements and letters of support for Measure 97 claim that Oregon will be gaining roughly $5 million for schools, seniors, roads, bridges, public safety and healthcare. However, there is absolutely no language written into this measure that allocates the money to these services. In fact, Katherine Driessen, a spokesperson for the group sponsoring Measure 97, was quoted as saying “If the Constitution requires some diversion away from the will of the voters—directing the money to schools, healthcare, and senior services—that’s for the courts to decide.” When push comes to shove, there is nothing stopping the State of Oregon from using this new revenue for whatever it wants.

Propaganda in favor of Measure 97 claims that Oregon already has the lowest corporate taxes in the entire country. This is a lie. Top statutory corporate tax rates in the country range from 4% – 12%. Oregon ranks 7.6%– already on the high end.

Some are also spinning this proposed hidden sales tax into a workforce issue, claiming that our youth need more and better education (which this measure will allegedly fund but remember, that’s not written anywhere) in order to fill jobs when they are older. While it’s true that we do hear from small business owners around the state that one of their largest concern is a lack of workforce, but it is not because the current workforce didn’t receive enough class hours in grade school. Implying that we aren’t able to fill jobs because our children are uneducated is quite absurd. These are two separate issues and need to be addressed as such.

In fact, the Legislative Revenue Office, a non-partisan State office comprised of economists, reported that Measure 97 would inevitable result in a decrease in private-sector jobs. They also reported that the most significantly-impacted population will be low-income families. Now I ask you, how will job loss help our state’s workforce issue?

But possibly the part that worries me the most is when our leaders at the state level admit that Measure 97 has its problems and needs some “fine tuning.” Why would we pass a measure that is admittedly problematic? And based on the recent sessions, do we trust the current legislation to have the political will to fairly fine tune it after it’s passed? We are fortunate to have a few great elected officials, but as a whole Salem is not operating on behalf of its constituents.

In short, voting yes on Measure 97 is the equivalent of setting yourself on fire because you’re cold. It’s extreme. It’s harsh. And it will get the job done, but at what cost?

The Chamber Board and myself value your input and insight. Feel free to contact us anytime at info@tillamookchamber.org.